In part 4 of the early Women’s Rights Movement series, we look at the victory of the suffrage movement. August 18, 1920 Congress ratified the 19th Amendment giving women the vote in national elections.   This was the culmination of more than 70 years of work by women’s rights advocates. Formed in 1890 by combining the two major suffrage parties of the time (NWSA and AWSA), the National American Woman Suffrage Association (NAWSA) used a two pronged approach to achieve their goal:

Early victories for the Suffrage Movement came in the efforts for state enfranchisement. The West played a particularly important role in this approach.  The states west of the Mississippi were the first to grant women the right to vote.  This can be attributed to the rapidly growing population filled with often more progressive businessmen, farmers, ranchers, politicians, and independently minded women. 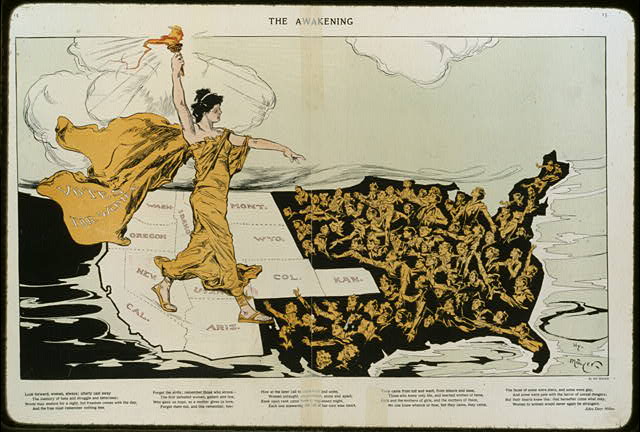 State by State grants of Suffrage:

California suffragists in particular launched a spectacular campaign of displays, graphic artwork, famous supporters, and immense hands on efforts to get the men of California to vote “Yes” in 1911. Ultimately, it was a tight win at an average of one vote in each precinct tipping the scales in favor of suffrage.

In addition to the state by state approach, movement leaders realized that a national amendment was necessary for the entire nation to achieve voting rights. Not only was the state approach costly and lengthy, but some states (such as those in the South) would most likely never grant women the right to vote.  Therefore, Alice Paul and Lucy Burns, influenced by European Suffragists and the women of the Western states, staged a suffrage parade in Washington D.C. for the day before Woodrow Wilson’s inauguration. This parade led directly to the reintroduction of the suffrage amendment and the establishment of the the National Woman’s Party (NWP), the more radical arm of the movement.

For a more in-depth look at the various groups and parties of the Suffrage Movement, check out our lesson plan “Ideas and Strategies of the Woman Suffrage Movement” adapted for Middle School, High School, and University students.

Poster: “The Woman’s Hour has Struck…Woman Suffrage is Coming” 1917.

Essay from the Nation Women’s History Project on California’s campaign for suffrage.

For an international component check out “Suffragettes to She Devils: Women’s Liberation and Beyond” by Liz McQuiston. This book features some truly amazing images from the Suffrage Movement worldwide.